I’ve previously read that life, in SL, moves on average 7 times faster than it does in RL. I think this was coined to reflect the ‘dating’ process, but it’s fair to say that SL events can and do turn on a sixpence!

Last week, I was so convinced that naturism in SL had come to the end of the road, a few pockets of resistance notwithstanding, that I decided not to re-new our ownership of the .com web space, and I had already prepared a post which would have said that I’d close this blog in November, when our ownership of our .com space ran out. Then Flo (FlowerFairy) messaged me to say that she was equally struggling to be able to contribute meaningfully, or even find the time to  and resigned her position as co-editor. It seemed to me that SLN might well have run its course, and I know for certain that despite her best endeavours, Gigi was and is struggling for things to write about. I was beginning to share that sense of despair. But what a difference,  as Dinah Washington once sang, a day makes.

Firstly, news came in that Elbag Gable has reclaimed the Eden Naturist Estate and the landscaping of it, back to its original wonderfulness, begins on Monday (see a couple of Eden Naturist group messages, in italics, below). Next, Ella messaged me inworld to ask if I’d seen Elbag’s messages. I had.

In life, sometimes you get nothing if you aren’t prepared to lay your balls on the line. So I laid mine out there and, after a bit of catching up with Ella, threw the question out there. ‘Hey…interested in writing for SLN again?’

An eternity later (i.e. the two minutes it took her to think about it and reply), she responded in the affirmative! 🙂 Now, I stress that Ella is not back as editor. She and Gigi will share the duties to give them both a chance to not feel swamped by the need to keep coming up with the goods on a daily and weekly basis. Hopefully they can share the load and encourage one another to keep writing and keep SLN functioning as a source of naturist news in and out of the SL grid! Both ladies deserve to have a life beyond simply writing for SLN, so I’ve stressed the need for them both to focus on themselves first, SLN thereafter. The quantity of posts may not be as before, but I know enough to know that both will deliver quality news about naturism, on and off the SL grid.

I fully intend to relocate the SLN office back to Eden as soon as it’s humanly (pixelly?) possible. Because, mark my words ladies and gentlemen, this news is a HUGE step forward for SL naturism, and hopefully the shot in the arm required to reinvigorate the blog!

I wish to thank Flo for her efforts, and continue to thank Gigi for hers. I was delighted to read, earlier, of her reporting on Tunick’s latest expo in Valencia. Not least because I’m in the photos, somewhere. I’m domiciled in Spain and made the drive to Valencia a couple of days ago. Despite being drivable distance, I’ve never visited it before, so my partner and I (she’s in the photos too!) drove up there on Wednesday evening and spent a couple of days exploring and enjoying a beautiful city.

I wish Elbag and Brenda every success in making Eden the place we knew and loved before, and I hope to reclaim Eden Eagle West, my SL home for many years prior to ‘issues’ that saw Eden change hands a few months ago, in due course.

I also know enough of Elbag and Brenda to know that this will almost inevitably lead to one huge, massive, naturist opening party, or parties, in due course. Welcome back, Eden! We missed you!

below…messages I received regarding Eden’s imminent phoenix-like return (and hey, Elbag and Brenda, how apt that the Phoenix is a bird too! (all Eden sims are named after birds, for those of you who don’t play SL) Perhaps the next new Eden sim can be called ‘Phoenix’ to reflect this greatly anticipated rising from the ashes!

I am still in negotiations but can tell you all that in a couple of days Eden and The North Sea will be under my ownership; my management team I am sure will all be back too helping me to revitalise and re-establish the Eden Naturist Resort that we all knew and loved previously; we will be re-establshing the North Sea as SL’s premier sailing venue – there is land for sale so come on over and grab your plot before it is all sold!

Hi all
Update time; I think the transfer of Eden and The North Sea to me will be completed sometime Monday. We will start re-landscaping work straight away; rebranding of estate logos is a priority and I hope that the current tier payment method will transfer painlessly to my management quickly as well.
A HUGE thank you to the 10 people who have moved back to Eden over the last 24 hours and I hope to see fewer parcels for sale as more people return home to Eden in the next few days.

Spencer Tunick has just held his latest happening in Valencia, Spain. There is a huge gallery to view at Valencia Plaza. They’ll be subject to copyright, so I won’t go mad republishing them here, but instead show a couple of the less ‘up close’ variety under ‘fair use’.

What’s noticeable about them is that the Spanish media freely portrays full frontal nudity without any feeling they need to censor, a total contrast with the laced up media (and social attitudes) of the British and American media and public. 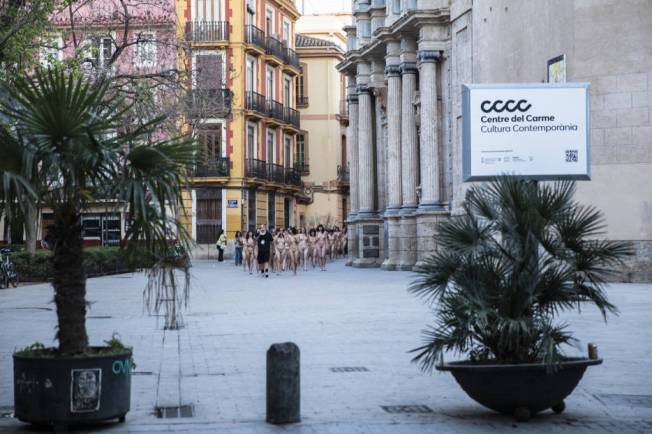 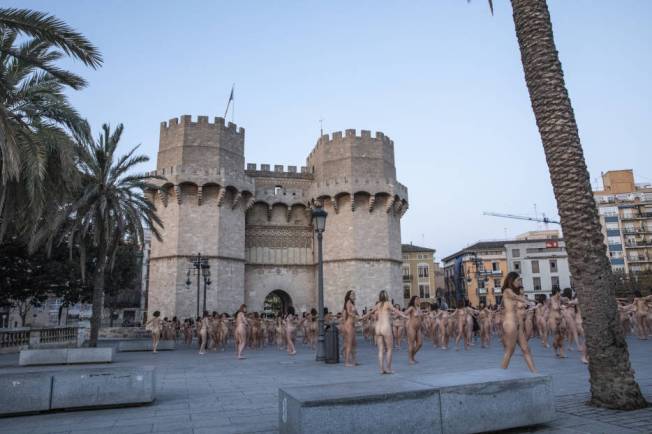