While chasing links earlier, I was drawn to an image that eventually led to a link on a site called The real does not efface itself.

The article was about the idea of beauty and masculinity in classical Greece and focussed on two bronze statues discovered in 1972 off the coast of Italy. Now known as the Riace Bronzes, after the place they were found, I was intrigued by both the manner in which the writer, Alex B, described them and because they also had some resonance to nudity (particularly the male form) and to Second Life nudity. 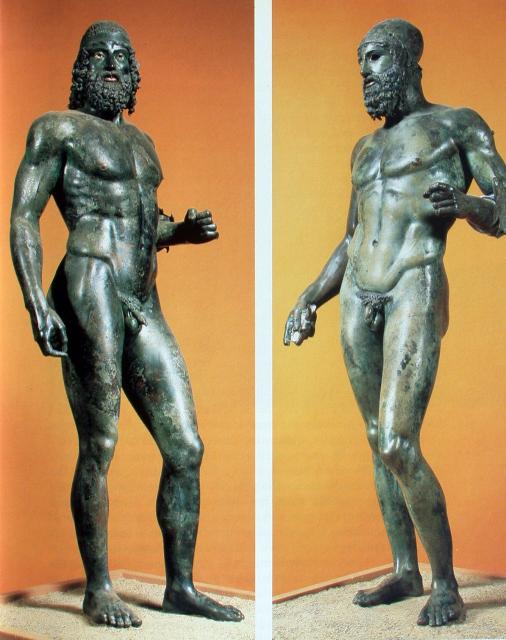 Throughout classical Art, the male form has always been portrayed realistically. And this is where the SL perspective comes in! Guys, these realistically sculpted bronzes do not have penises hanging to their knees! You don’t have to have them either!

Caravaggio, Michelangelo…all depicted realistically. You can too! In fact, I suspect we’d respect you all the more for it, rather than sporting some ridiculously sized (and badly coloured to your skin) appendage.

Even without being someone who looks for nude photos on the internet, I discovered that Alex B is the mature model in a photograph that manages to turn up regularly on ‘naturist’ websites. As it’s subject to copyright we, as usual, won’t republish a gorgeous photograph called The Discomfort of Intimacy, but allow you to follow the link. Alex B also has a web presence in various locations and has her own website. I suspect some readers will recognise her when they see her. Apologies for not putting up any images of the lady herself here, but we do try to ensure we don’t infringe copyright, and as Alex is a model, earning a living from her photos, it would be grossly unfair to re-publish any images of her.

The Discomfort of Intimacy depicts an older nude woman with sliver/grey hair (Alex B) alongside a younger male (called Cidy) and is a phenomenally powerful image, one that Alex B herself said stirred up some odious racist commentary when first published.

I was so taken by the photo that I asked Hugh if he might fancy trying to re-create it in an SL context. As usual, perfect recreations are difficult as the poses can never be fully matched, but…

Original shots and credits, along with some background by Hugh, is on our flickr page, in a new album entitled ‘The Intimacy of Fear’