I’d never heard of Towel Day until Uccello Poultry mentioned it on her blog, The Poultry Report.

She’s even done a Topless Tuesday photo to accompany her reference of it, but you’ll have to click the link to see the photo.

Towel Day celebrates the work of the late British author, Douglas Adams, best known for his book ‘The Hitch Hiker’s Guide to the Galaxy‘. I’ve read it and, indeed, judging from the wiki entry, I appear to be in possession of a first edition, which I picked up in a second-hand book shop in London maybe 20 years ago. I have to confess that sic-fi isn’t really my thing, so I didn’t really get into it that much.

Essentially, according to wiki, The Hitchhiker’s Guide to the Galaxy states that a towel is the most important item a hitchhiker can have. It also mentions that “to know where one’s towel is” means to be in control of one’s own life. It describes the towel as a multipurpose tool which can be converted into such things as a sail for a makeshift raft, a gas mask, a blindfold and a weapon for hand-to-hand combat, which is the reason there is a Towel Day, the first one being held a fortnight after Adams’ death in 2001.

Now that I know that, it certainly resonates -or should resonate- with naturists everywhere. The one essential piece of naturist ‘kit’ to have at all times is a towel. Throw it on the sand. Dry yourself with it. Set it on a chair prior to sitting down for hygiene purposes.

Further intrigued, I did some research to see if Adams was a naturist, as it would perfectly close the circle of the ‘towel’ escapade. There’s not much evidence he was a naturist, although he did, famously, appear nude, walking into the ocean, at the beginning of episode 2 of the TV series of his book. 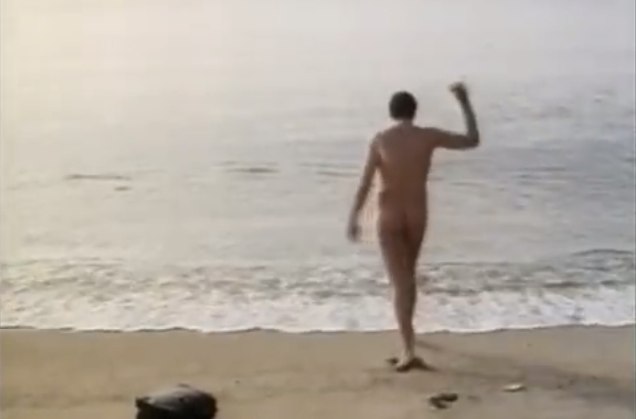 Apparently the actor engaged to do the scene was sick, so Adams stepped in at the last moment.

For naturists, a towel is never far from hand

Towel Day is next Monday (May 25th), and it’s a UK Bank holiday, ‘Spring Bank Holiday’, or Whitsuntide, to coincide with Pentecost Sunday, when Christians celebrate the Holy Spirit descending on Christ’s disciples. It’s also a big day, in the UK, for Morris Dancers to do their thing in towns and villages in England (Morris dancing is an almost uniquely English thing).

Abbey models the male version of the 2015 edition of the ‘Towel Day’ towel.

If you want to join in, and wear your towel with pride, hop over to Uccello’s Marketplace presence, where you can pick up the towel for free. Note that, if you’re a little more shy, a female version, tied at the bust, is also available for L$0.