It was my absolute pleasure to talk to Hasuko Kuramoto at Commune Utopia’s Friday evening dance. If you don’t know, she owns and runs Midnight Lotus, a company that specialises in SL genitalia.

Midnight Lotus have a Marketplace presence, and have a store inworld, plus other outlets at sims like Wild Coast.

Anyway, our attention was drawn away from those around us to IMs….shop talk!…Hasuko talking about her hopes and plans for Midnight Lotus in the future, and me doing the same regarding SLN.

At some point in the conversation I started moaning about skins in some stores coming with nipple pasties attached so that you can’t properly get the full effect.

‘Try these’, laughed Hasuko, and passed me her Callisto nipples set, which I’ve spent a bit of the afternoon playing with, so to speak 🙂 , and concluding that these are marvellous!

I’ve got a skin I like but the nipples aren’t quite me. I might have been able to make a more qualified judgement on the skin had the store offered full disclosure over what can be found in a variety of different shapes, sizes and colours. But these will solve that problem, as I can now change the size of areola, the skin tone, the direction of them (kind of upwards in my case) and have total control over making them as unique to me as nipples are to everyone else on the planet. 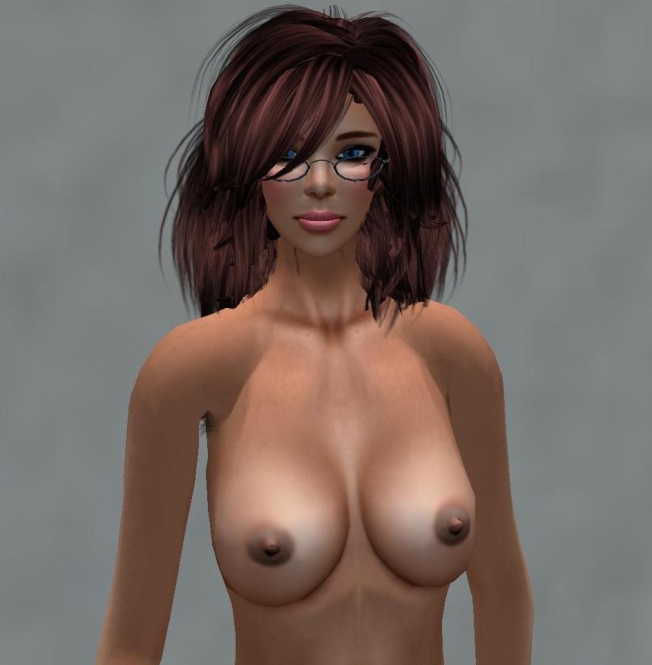 In the first photo I’m wearing them ‘out of the box’. Not my colour and not perfectly fitted…I wanted the photograph to show that they’re easily applied and can then be ‘fine tuned’ later as you experiment with the extensive control hud that offers full flexibility.

Picture 2 shows them with a different skin tone. Again, I’ve not fine tuned them for a perfect fit, that would take a few minutes to get absolutely correct, but it has only been a couple of clicks from the default to something that is now starting to look like me. 🙂

The nipples also offer some other interesting options. I’m almost beyond the point in life where I need to express milk 🙂 and I’ve certainly no plans to go through that again. But if you’re role-playing a new mother, then options such as these are terrific, and included as standard – there’s no need to purchase add-ons!

Again, an aversion to needles means that I’ve only ever had piercings done once in RL, on my ear lobes, when I was about 15. One piercing got infected and uncomfortable, so I took the studs out and have never since had my ears, or anything else, pierced. Certainly not my nipples!

However, there are plenty in SL who do like pierced nipples, and once again Hasuko has created a work of genius, by adding in about a dozen different nipple piercing styles as standard, and which will fit your nipples at the click of a button. No adjustment necessary!

What I’m going to say is that I’ve tried nipple piercings in SL over the years, but couldn’t really warm to them. Just too much adjustment was needed to the point where they became irritating. These, though, are the best I’ve ever tried and there is so much flexibility in them!

I’m currently at the stage shown in the second photo, and I’ll continue to fine-tune them to be a perfect fit when I get a moment away from RL to give them proper attention.

Every woman should own a pair of these! In terms of avatar enhancement, they’re one of the best items I’ve ever encountered.