While researching posts on Second Life as a predictor of social change, and Shaking the roots of the morality police, I came across a piece from the Independent newspaper, from August 2008, wherein naturism was being promoted as a ‘greener’ holiday choice.

The article  is a bit tongue in cheek, but it subsequently led me to the Econudes.org website.

Their mission statement says that Eco Nudes represents the Nudist and Naturist who is positively committed to sane ecological principles to help ensure that Mankind may survive the coming ecological upheavals facing the world. Eco Nudes strive towards a Vegetarian/Vegan Nudist/Naturist Lifestyle, believing that such a lifestyle offers the best chance for survival, real peace and harmony. 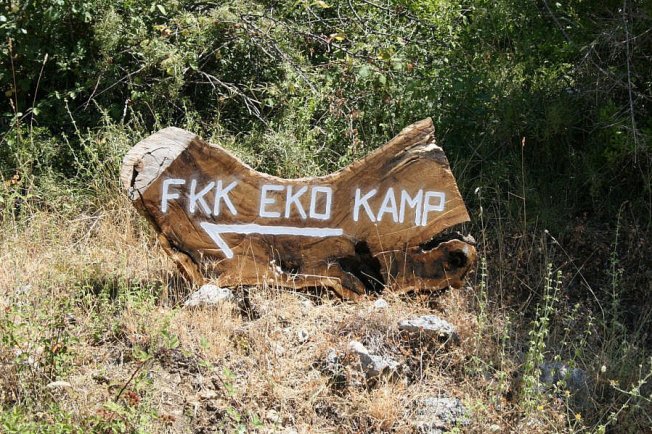 While not apparently overly active, the site is still active, and I’d recommend it as a jumping-on point for naturists who do care for the environment, a long established cornerstone of the movement.

So just how much of ‘a thing’ is eco-naturism? I kept digging and learned that you could volunteer to help at an eco- naturist campsite in Portugal, and that there is an eco-friendly naturist campsite in Montenegro, called Camp Monte, begun by a British couple, Steve and Denise, who (like SL avatar and RL vegetable farmer Tisha) dropped out of their rat-race some years ago to pursue their dream.

Indeed, the owners say on the website that ‘We were not eco warriors when we embarked on establishing Camp Full Monte. We were driven by pragmatism, economics and availability of products. We had no mains power, water or sewage systems, we had to find alternative solutions. To our surprise and delight taking an environmentally sympathetic route held the answer.’

The site, incidentally, is only 30 minutes drive from Dubrovnik, an airport served from the UK much better than the usual Croatian naturist havens.

We are often told that naturism is an ageing lifestyle (correct!) but evidence of the eco-naturist seems to me to be a way wherein naturist could be made current, relevant and (dare i say it?) ‘sexier’ to a younger generation (in the context of ‘sexy’ being ‘fashionable’).

This is a theme I may try to develop over the next few weeks, to see just where RL naturism could go in order to thrive, and to see if ideas pertaining to this are already germinating in the minds of SL users. It’s hardly a ‘representative poll’, but on the evidence I’m seeing, the typical Second Life user is increasingly one who has real life concerns for the environment and is willing to share these when prompted.

Are you an SL user for whom ecological concerns form part of your value system? I would be delighted to learn if SL users do have broad values that fir in with environmentalism and the new ‘counter culture’, of which RL naturism may be considered to be part.