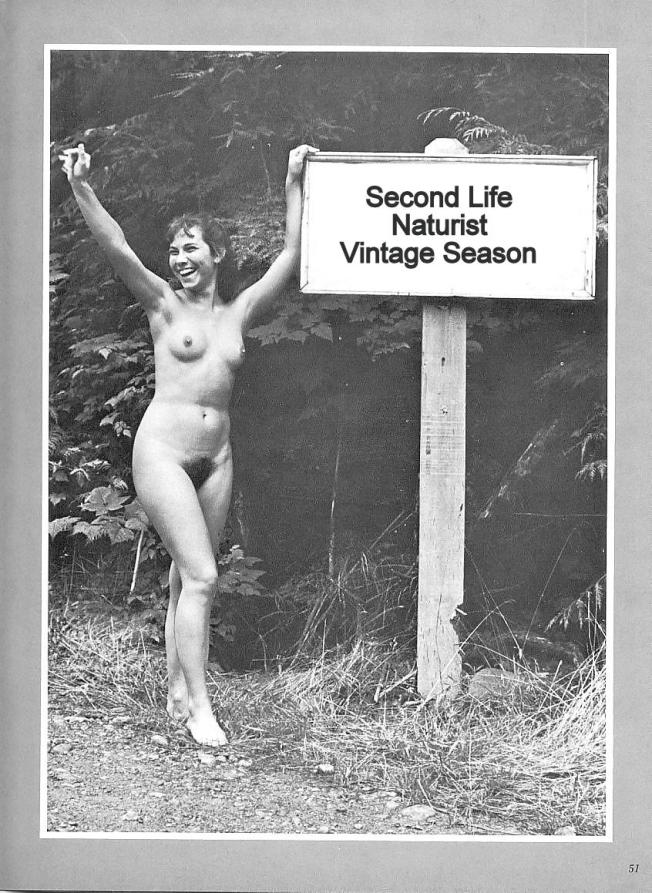 Before we dive into our ‘festival of vintage naturism’, let me establish a few ground rules.

1. For many people, the 1990s will qualify as ‘vintage’. For our vintage-fest, though, I’m going to consider the 1970s as the cut off point for ‘vintage’. Why? In illustrating what is vintage naturism (with photography from both real life and Second Life), I want to concentrate on b&w photography. Yes, I know that there was colour back then, and even long before that, but I feel that in the main naturist magazines would have been largely b&w (the cover excepted, or an occasional colour shoot) in the pre-internet era, and thus that sort of photography does lend itself to having a patina of ‘vintage’ about it.

2. ‘Vintage’, in this series for the next few weeks, may therefore cover anything from Adam & Eve (the first nudists?) right through to….somewhere in the 1970s, when an increasing level of naturist acceptance was felt. I know you may disagree on the 70s as a date, and may willingly point me at a lot of post-war naturist club activity around the globe, but I can say from this viewpoint that the only real changes in naturism since the 70s have been an increased visibility of the lifestyle, and a ‘fracturing’ of a straightforward naturist lifestyle to encompass things like ‘swingers’ (Cap D’Agde for example).

3. The SL elements of this vintage fest will attempt to recreate certain periods in history where nudity was apparent, and how society responded to it. Ergo, God appears to Adam & Eve and says ‘get dressed’. Painters make the nude (particularly the female form) a recurring theme of their work. Missionaries imposing clothes on ‘uncivilised’ tribes in Africa. Sparta. Naked Olympians. And more. We may not get to cover all of that, but we’ll drop in on periods of history where nudity was evident, where nudity caused some kind of stir, and replicate that on SLN. And if I haven’t mentioned key landmarks in the history of naturism and visible social nudity above, feel free to comment on what you would like us to cover (particularly if it seems likely that we can also replicate the period within SL).

4. As many historical photographs are undated and lack a location, please don’t write to tell me I’m a decade or a border out! 🙂 If it looks contemporaneous to the period under discussion, I may include photos that aren’t strictly of the exact period.