Something I wasn’t aware of, but picked up via Vana Disser’s blog, was that SL Amsterdam was commemorating VE Day. After almost six years of war, Nazisim was defeated and victory in Europe was declared on May 8th, 1945.

We’ve had all manner of events to mark the 70th anniversary of the end of World War 2, and I listened to a church service broadcast from Westminster Abbey this morning on BBC radio. 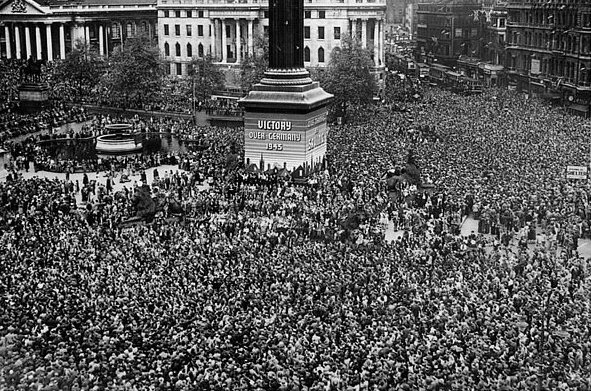 My own grandfather and great-grandfather spent the day in Trafalgar Square. Both, who knows, are maybe in the middle of the seething mass of people photographed above.

Where evil exists, it is incumbent on all of us to face up to it, whether it’s in the form of Nazism, someone bullying someone for wearing a hijab, or someone killing because they don’t like the work of some cartoonists. All of these things are evil.

Seventy years ago, the world rejoiced that it was over, and we should never forget what a generation did to free us from oppression, and the price they paid. Millions who believed in their need to face down fascism didn’t get to witness the victory. Millions more paid the ultimate price for being the ‘wrong’ religion.

I’m slightly shamed by the fact that SLN did not commemorate the event. Often, we try to reflect the real world in what we write, and report on how that’s portrayed in SL. This time, we got it wrong by not making some commemoration on the day.

I suspect we weren’t alone. It seems that only SL Amsterdam have reflected this, with images of the Dutch King and Queen laying wreathes in Dam Square folded into the sim.

It’s vital that we remember what might now seem like distant, historical events. It’s only by commemorating these things, and keeping them alive, that we remember the circumstances that led to war and the deaths of millions, so best to ensure we never repeat horrors like that again.

We live in an increasingly divided, insular and tense world. It’s important to reflect on that, and ensure that we strive for mutual respect and understanding.