I’ve added this page to include contributions from readers. Having published our email address slnaturist@gmail.com I’m pleased to say that I’ve already got a few contributions through that, as well as being passed photos via IM inworld. I’m amazed at your creativity with photography, and I’d like to thank those who have contributed so far. I’ll be uploading readers’ contributions to the blog next week (circa 25th March) and adding more as they’re received. Thank you all! 🙂

I have no information on the above avatar, other than it’s Giovanni from Italy

I’m grateful to reader Gen, who sent me a few self-portraits she took at Tess’s Naked Dreams island at Eden. Particularly so, as the layout of the apartment very much resonated with me.

My usual RL holiday home in Spain looks very much like the way Tess has laid out the apartments here. Almost certainly coincidental, but it has set my mind a-wandering towards summer and my own hols later this year.

There’s a sense of being able to wave and say ‘hi’ to the neighbours as I step from the lounge/kitchenette onto the balcony in the morning, mug of tea in hand, wiping the sleep from my eyes and almost immediately getting into conversation with my French neighbours. In fact, I’m so taken with these photos that I’ve IMed Harry with a view to me re-creating that exact scene from my RL in SL.

About the only difference is that I don’t favour Grateful Dead tie-dye styled beach towels!!!!

We have a backlog of readers’ contributions building up, as well as an expanding collection of photoshoot ‘out takes’, so for no other reason than they’re some nice pix, here’s an update! 🙂

The pix of Larry in gym poses were picked up while surfing the grid for that continuing ‘naturist related clothing’ post I’m still working on.

The towel around Larry’s neck is one of the items we’ll be trying to offer as a ‘group gift’ when we’ve finished it all up. Towels around necks, or held in hands, are part of the ‘naturist uniform’, so we’re going to be working on some group gifts. Incidentally, the gyms featured are not ‘naturist’, but I guess the shower areas are. We explained to Larry what we wanted to do and he was happy to pose for us. 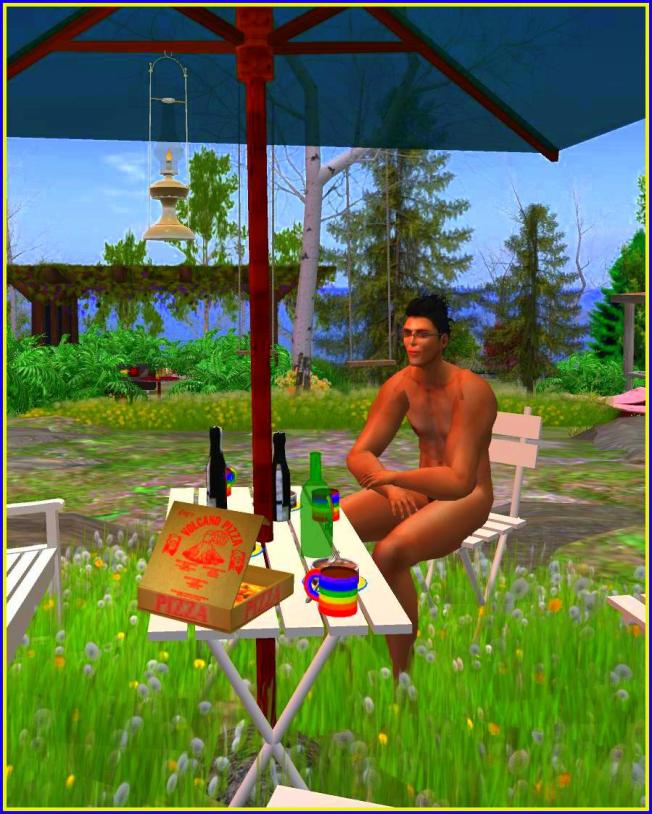 November 20th, 2013. Reader Kurt enjoys pizza at Sweden Naturist, which looks lovely as usual. In the spirit of my own ‘flag colour bordered’ photos in the ‘Postcards from Spain’ series, I’ve added the colours of the Swedish flag, in homage to Evacaroline and the Sweden sim 🙂

A reader called Izzy has also submitted a photo, telling me that she was looking through old, unopened gift boxes and found these briefs as part of a minikini set and says ‘I liked the way I could get pubic hair to peep over the top of them’. Sadly, Izzy hasn’t told us what the gift was, or where the photo was taken, but we agree that there’s a nice sense of sexuality oozing from the photo. Thanks, Izzy.