I was sim-hopping earlier, and chanced upon a mall dedicated to the prim boobie community (this year’s SL ‘big thing’, as we all know). I don’t really keep abreast (see what I did there?) of prim boobs, but I tp’ed over to Chest Treasures (see what they did there? A clever name, indeed 🙂 ) and had a rummage around. Quite a few freebies to be found, but the one thing that did catch my eye was a lovely ‘friends’ pose that just looks perfect for the naturist community to have some fun with, and take a few photographs (you’ll find this upstairs in the mall, in a shop called Ellette). Suitable for textile friends too, but I think it suits bare breasts better than it would a bunch of sweaters 🙂 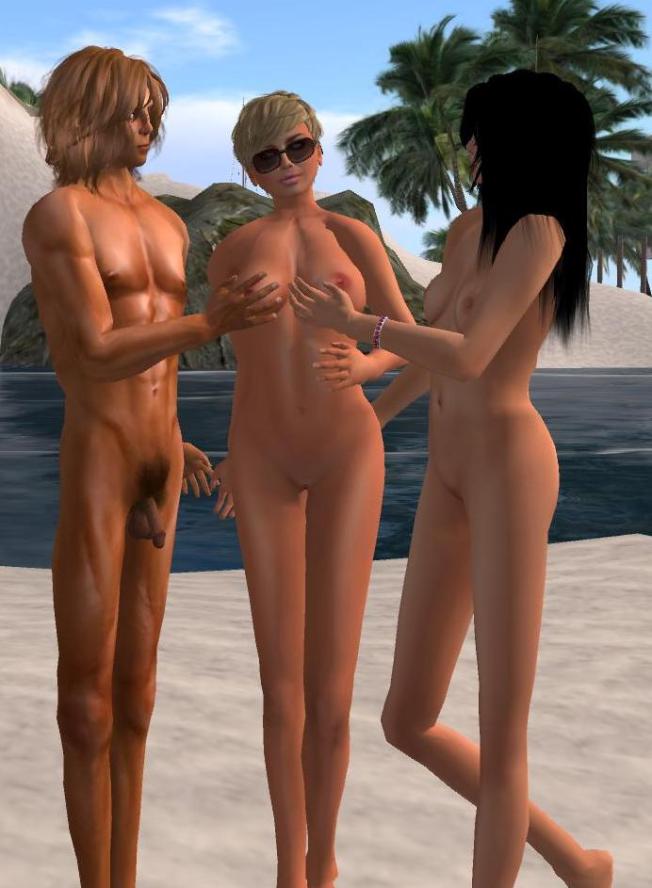 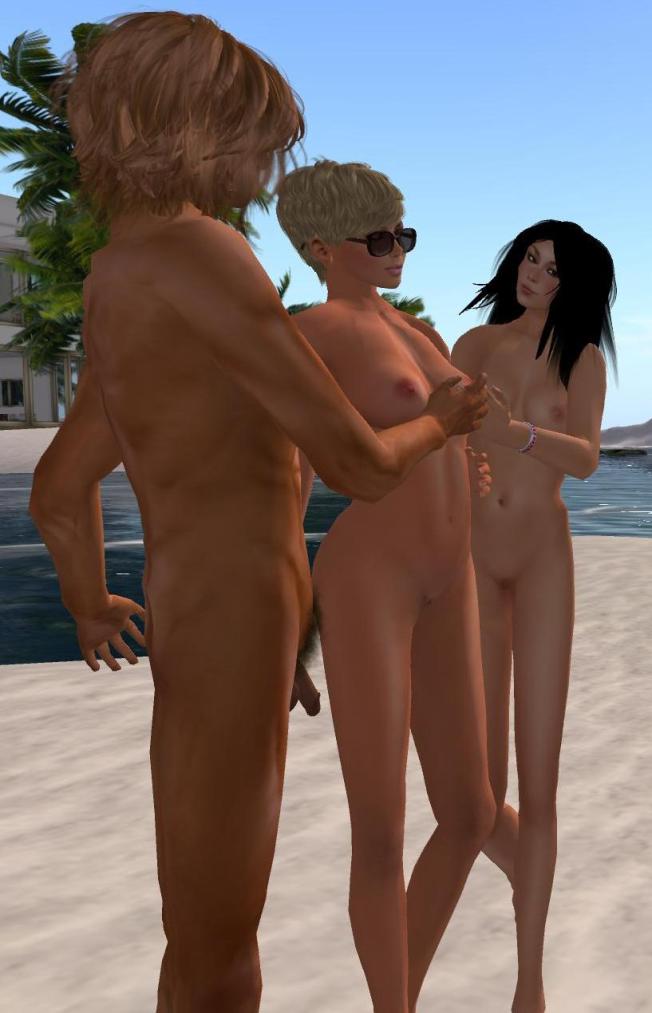 Holidays over for another year 😦

I’m back to work, and as far as SLN is concerned, already working on the next issue of the mag.

This is now the time when many of us will resort, in darker nights, to naturism of a ‘virtual’ variety. We had a good (for us) summer in our part of the UK, with a blistering spell of weather in July, something that made indoor work on a computer unbearable. But at least in having it we face autumn/fall in cheerier heart; the past four ‘summers’ have been washouts.

Talking of summers….;)….RL & SL will have a little bit of a convergence with Hallowe’en just around the corner. And what better place to get outfitted for it (in RL) with a Hallowe’en costume such as the Ann Summers ‘Dark Angel’ outfit. (Ann Summers is a UK lingerie/sex toys/costume outlet, and has shops in many of the UK’s High Streets). 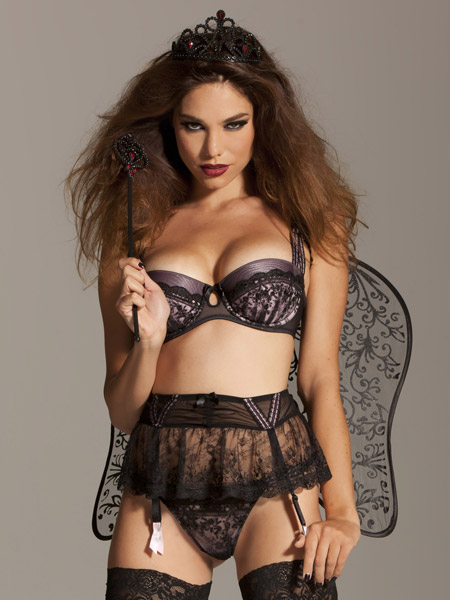 Dare I wear such a thing, lol?

I ask because, well, we’re planning a sort of SL naturist Hallowe’en Party, and you may well be invited 🙂 So, keep checking the various SL blogs and thinking about appropriate costumes for it. None of the lingerie in the photo above is necessarily required, but the wings, tiara and wand would be entirely suitable. We’ll try and keep you up to speed on this as plans progress.

It was a last-minute thing before we even put the clothes on yesterday. We’d packed our suitcases taken them to the car, and were heaving them into the boot (trunk) of our hired car -in our birthday suits! 🙂 – when I heard a voice behind me ‘Hola! Ella!’ I turned around to see a briefly unfamiliar face behind me before the penny dropped and recognised her as Luisa, the daughter of one of our (Spanish) neighbours. My, how she’d changed in the two years since I last saw her.

Two years ago, she was a shy fifteen year old and a reluctant naturist. Nudity is obligatory in various complexes pools, and she would never be seen in the pool area, just too embarrassed by her own developing body and even the concept of it. Her parents’ casual naturism made her squirm.

I didn’t see any of the family last year, and in fact wondered if, in light of their daughter’s whole reluctance to the lifestyle whether they’d sold up and moved to a textile location elsewhere. I should have known better. Naturists are made of sterner stuff.

Two years ago she would come to our apartment to practice her English (we were the only English speakers in residence) on a daily basis, dropping in for half an hour or so. And we, in turn would practice our Spanish on Luisa. But her sheer embarrassment at nudity would mean both of us would throw on a sarong when she turned up.

How times have changed.

Yesterday, a 17 year old with her own style, punky hairdo and tattoo, body now fully developed, greeted us. We spoke for a while before we had to go, but it was a thrill to see Luisa had grown into a young woman with her own style, a great command of English, and a body confidence that meant she was wearing only bikini briefs (and those in place only because she was intending to walk the dog outside of the naturist area -topless doesn’t even raise an eyebrow here, anywhere). I gave her my email address and hope to bring you further news of Luisa’s RL naturism soon. 🙂

Back home now (it feels so cold) to begin work on SLN 10, which I intend to have published around Hallowe’en.

Walking back along the beach we encountered a Spanish family. The Dad already nude, Mum in a sarong, and teenage son (which obviously can’t be replicated in SL, well it could, but I’m not making a teen avatar) with a shirt on, but nothing on the bottom. A nice, relaxed family scene of Spanish beach life. So natural and pleasing from a family perspective. So I got Mr.Keng to do a variant of it. 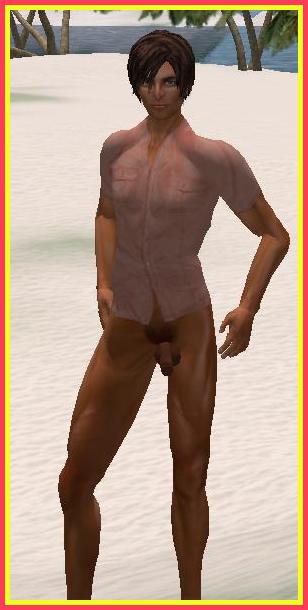 PS. All packed, checked our flight times and they’re later than I recollected when booking. So it now seems we’ve four more hours of sunshine to enjoy 🙂 Oh well, all we need to unpack again is a towel. 🙂 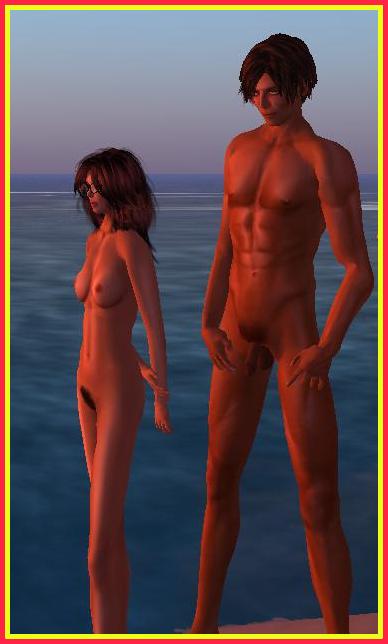 Up in the dark, stars still visible, and down to stroll the full length of the naturist beach, encountering only an occasional fisherman. Back to the apartment now to begin packing (and dressing) 😦

Well….that’s just about it. Off around lunchtime, back to the airport and a flight back to our much-missed children. Realistically, we won’t do more than a week without them next year.

It was dark, it was the fag-end of a day, and the season, but we made it to the local chiringuito, nude, and had a coffee to soak up the alcohol we’d consumed earlier in the evening.

Our French neighbours have/had (naturist) guests in, a quartet of naked people enjoying a meal together. Mr. Keng and I absented ourselves from our balcony to enjoy a nude stroll to the beach, watched the night fishermen do their thing, lights at the end of their fishing rods (we should set up some pix involving fishing, nude!) and came back to the apartment. Their guests -people well into their 60s- left, wandering naked down a public street. What a wonderful place this is! 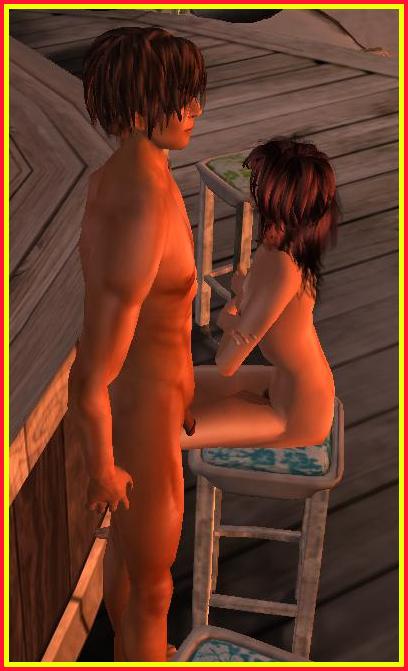 You were wondering where today’s post(s) had gone, weren’t you? We’ve had appalling internet connection all day until Mr.Keng had the bright idea of unplugging the modem and plugging it in again.  🙂 Suddenly, a service worth talking about!

Not that I would have had a lot to write about. The anticipated influx of locals didn’t seem to happen today. Plenty of people still on the beach, but it just wasn’t as busy as my previous experiences of weekends here (or in other naturist resorts) has been. 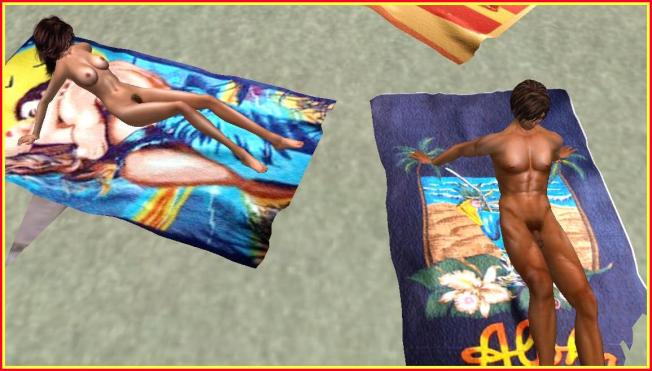 And while 10 days seemed like a terrific idea at the time, and the first few days were marvellous, we’re both missing our babies 🙂 Time to get home! By the wonders of modern technology we’ve been able to see and speak to them each day (FaceTime) but it has just made it harder. 😦 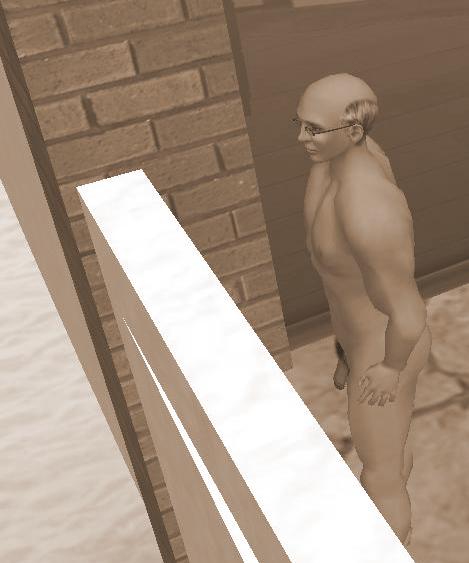 Yes, I’m awake exceptionally early 😦 Yes, I’ve been woken a bunch of drunken teenage girls rattling down the street, shouting loudly in the manner that drunken people do when talking ‘normally’.

Mr.Keng has gone back to bed, so I thought it was just me on my own until I saw the lights on in the apartment opposite. It rather looks as though Consuelo’s man -the elderly gent who lives opposite- has been disturbed too, as I can see a light on his apartment. So I rather thought it was time to report that he has been on his own since our last sighting of ‘Consuelo’. We’ve only today and tomorrow left of our holiday (10 days not enough this time, we’re coming for two weeks next time) for Consuelo to reappear and join the ranks of happy naturists. 😦

I’m disappointed she didn’t stay. It’s always good to watch someone shy or nervous take their first steps into naturism and have their own body image altered forever.

However, in the time-honoured tradition of films and television programmes, we’re going to make a couple of alternative endings for this 🙂 and leave it up to you to decide which one you prefer.

I’ve blogged about a particular ‘situation’ before, where I’ve seen people whose body language suggests ‘friends’ rather than ‘lovers’. There’s one apartment close to use where the (Spanish) owner seems to invite several people down for weekends. Some strip, some don’t. In each incidence it seems, by the body language, that they’re friends, and aren’t involved in relationships.

The Spanish guy might invite 2-3 people, and the way they conduct themselves always infers that they might be social friends or co-workers.

I’ve said before that I’d find it slightly odd to be stripping off in front of family, friends or colleagues. Of course, I’ve friends I’ve made through naturism, and that seems fine, but I’d still find it odd to bring a friend or my siblings here and be sitting around naked with them. And I think I’d die of embarrassment I happened to come across a family member nude on the beach. But maybe that’s just me.

Anyway…the weekend is upon us, and I’ve already seen a couple whose body language suggests they’ve come away for a weekend and, gulp, going naked is involved.

One one hand, it’s terrific that people can be so relaxed in one another’s company. One another there’s that ‘strangeness’ element, but maybe that’s just me.

The girl in this couple arrived with a sarong around her, the guy wrapped in a towel. He took off his towel and got into the water immediately while she sat by the pool’s edge, wrapped in her sarong. And she was….giggly, suggesting that she was desperate for the conversation not to dry up and whatever else you do, ‘don’t look at his genitals’. Which were semi-visible, I guess, while he was in the water.

So she giggled and laughed and…eventually…the sarong was peeled off as she sat there, breasts now exposed. And after more giggling and conversation she….eventually…stood up at the steps into the pool, finally fully nude before him.

And at that moment he chose to climb out of the water so that he, too, stood fully nude before her.

And then everything seemed to relax. Both gave the impression of now not caring that they were naked in front of one another. Some time later, the ice broken, they left the pool area. 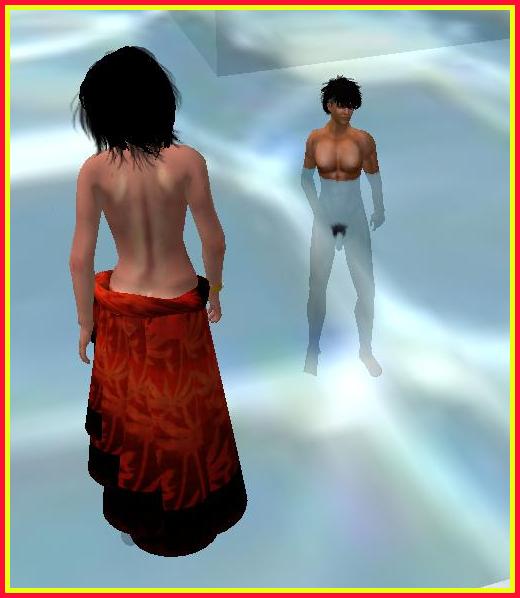 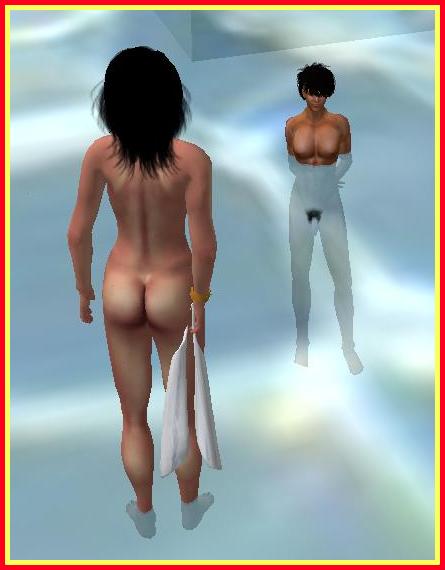 ‘I finally stand naked before you!’

What a great way to work!

A guy is in our apartment block working at some tiles at the side of the pool. He has the wonderful pleasure of working, earning a living, totally nude. How great might that experience be?

That said, despite being on holiday, both Mr. Keng and I have been undertaking some electronically possible work ourselves, conducted nude at our laptops. 🙂 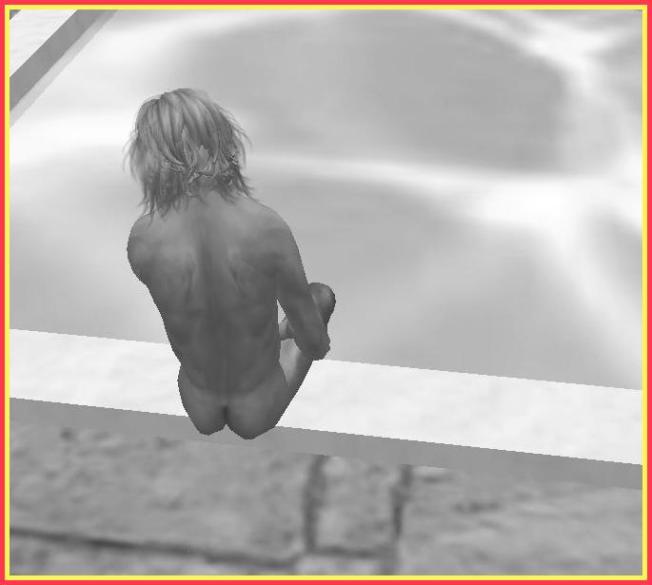 And if you don’t believe me, here’s a photo taken at Su Casa, the SLN office, by the lighthouse, where you’ll sometimes catch me working inworld and online, on SLN related stuff. 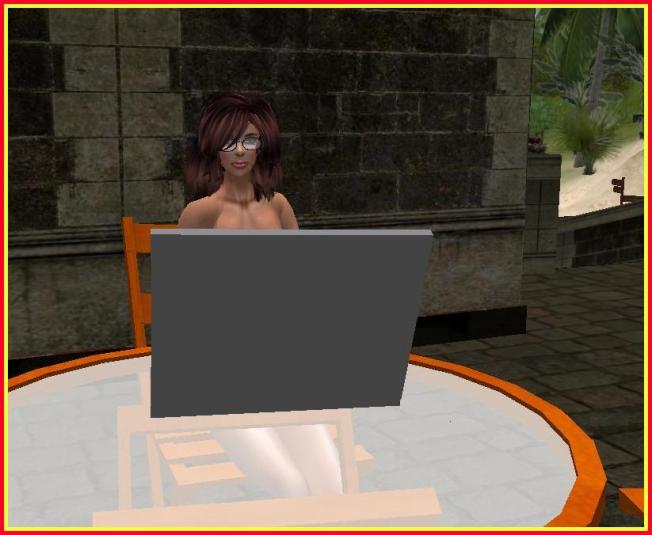