I hope my friend Kat Feldragonne doesn’t mind me utilising a photo from her blog, one she used in her ‘Look of the Day’ about a week ago, a photo also featured on her Flickr page. You need to check out both the blog & flickr page. I dearly love the quotes, epithets and sense of the poetic in the words Kat adds to her posts, such as the one above. Why? Because it’s the sort of thought-provoking words, as much as the sense of SL style, that help to inform the work on this blog.

Twelve words…but oh so true of the real world as well as in some parts of SL. Nigeria’s boy soldiers…the actions of Boko Haram…the de-sensitising of attitudes to death in things like Call of Duty, often played by adolescent boys. The ‘normalisation’ of kidnap and rape as a ‘legitimate’ part of war being waged by this inhumane groups like Islamic State...

Yes…War is always good at making little boys fall in love with it, and the current generation, as never before, are being exposed to a hygienic, de-sensitised, romanticised version in which there’s always another computer life if there’s a fatal shot fired. Call of Duty, and its ilk, will never contain the screams, the pain, the graphic open wounds, a slow darkness and silence descending as the victim falls into unconsciousness or death. Perhaps if they sold it on the basis that ‘if you’re shot, the game cartridge will never work again’ people might think their approach to it. Likely?

Happily, SL’s gameplay is never likely to be as immersive, in respect of war, as games dedicated to it, so it’s not going to be as popular in SL as….dancing! Or, come to that, naturism!

But Kat hits the nail, firmly on the head, in the quote from her post. The world’s governments and armaments manufacturers will always manage to engineer situations where their profits take precedence to humanity. The ‘war on terrorism’ often little more than a ‘war on a peaceful world, if the overwhelming majority of its citizens had their way’. Do any of us have markedly different hopes and aspirations to anywhere else in the world? Does a mother in the 20th floor apartment of a Manhattan apartment block have radically different views as to her children’s future than one in Nigeria? In Gaza? In Jerusalem? In Syria? I don’t think so.

In the meantime, dark forces conspire to ensure that War continues to get the little boys to fall in love with it. Without that love, war can’t thrive.

An absolutely wonderful and thought provoking quotation, Kat. Thank you.

Look, I know that entering the world of politics, in the blogosphere, is a dangerous thing. We’ve had two failed attempts at producing a ‘politics issue’ and thus our coverage of politics tends to be of a ‘soft feminist’ variety (particularly where nude protest, something of a trope in the protesting arena, is concerned).

But we simply cannot allow the abduction of schoolgirls in Nigeria -over 200 of them at the hands of Boko Haram– to go uncommented. 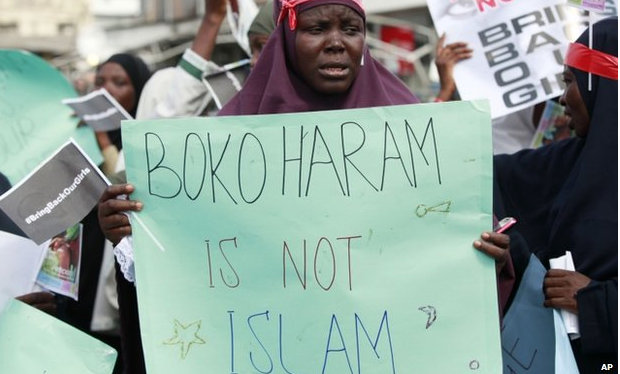 A radical Islamist group, Boko Haram’s name is generally considered to be translatable as ‘western education is sinful’ (I note there are discussions on an exact translation). The group’s leader is Abubakar Shekau, as odious a piece of work as we’re likely to encounter until the next odious piece of work comes along.

I’m delighted to read that President Obama is giving up his weekly address in place of his wife, who has spoken out on the subject. The greater the coverage of this situation, the greater pressure can possibly be brought to bear and bring those girls home safely.

“What happened in Nigeria was not an isolated incident. It’s a story we see every day as girls around the world risk their lives to pursue their ambitions,” she said.

She cited the Pakistani schoolgirl and campaigner Malala Yousafzai, who was shot in the head for speaking out for girls’ education.

Shekau is simply another one of those failed human beings who shocks with his inhumane approach to life, and his hijacking of Islam, skewed into a uniquely personal view that cannot be found in or justified in the Qu’ran he apparently quotes in videos which mock attempts to capture him.

Those of us in ‘the west’ cannot afford to be smug about these matters. There are times when, for girls and women, there can be a ‘glass ceiling’ in terms of true equality. But some other parts of the world are centuries behind us in this respect. Overseen by fanatics for whom the west, liberal ideals, Christianity or anything else aren’t just ‘the enemy’. For these morons, women and education for anyone/everyone is the enemy too.