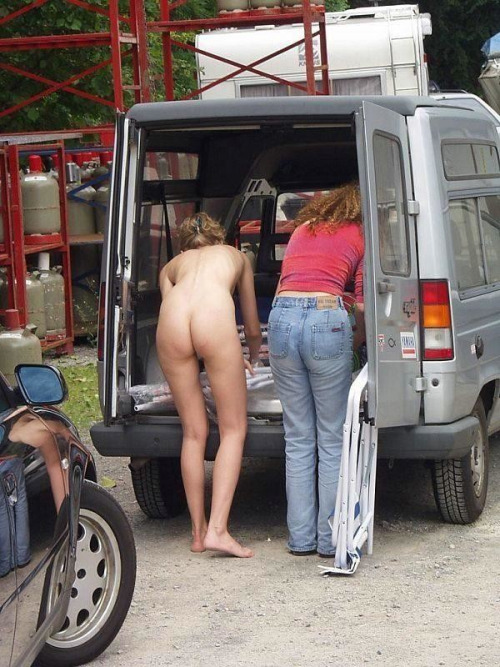 I saw this photo online and it immediately reminded me of one aspect of naturist life, in resorts or campsites : the bread van!

Now, I know that the women above aren’t at a bread van, they simply seem to be unpacking deckchairs, but other than that the scene will be very familiar to those on campsites in France or Spain. Each morning, perhaps around 900am, you will hear the little strangulated ‘peep peep’ of the van’s horn. I’ve often speculated that these vans have a unique, and not very practical horn sound for usual driving, and that they’ve maybe had an additional horn fitted to differentiate between their vehicles and other, more normal, road vehicles.

Because of the heat, bread will go stale quite quickly, so in Europe it’s the norm to pretty much buy bread on an ‘as you need it’ basis. Every day. It’s not something bought and stored.

So on hearing the little strangulated horn in the morning, a parade of naturists will make their way from their apartments, onto the street, to buy their bread fresh for breakfast each morning.

The internet sometimes identifies such clothed/naked scenes as CFNM or CMNF (Clothed female, nude male or clothed male nude female) as if these are some sort of sexual fetishes, a sub-genre of pornography that amuses me endlessly, as it doesn’t really exist in naturism. Of course, these scenarios exist -daily, hourly- but it’s not a ‘sexual thing’ in the way it’s often portrayed in cyberspace. I’ve often held conversations, while nude, with clothed people, and vice versa. It just so happens they might be off out somewhere while I’m about to go swimming, or I’m going shopping (dressed) while they’re lounging on their terrace. It’s never ‘a thing’ within naturism.

Photo removed due to copyright infringement.

Purchases made, it’s usually a case of heading off to your terrace for that first, important, tea/coffee of the day, usually accompanied by orange juice and the recently purchased bread. Breakfast, au naturel, is a lovely experience, quietly easing oneself into the day ahead.

Ella adds : If anyone has any issues, at any time, with copyrighted material please let me know and I shall remove said items accordingly. I’ve always been keen to ensure we don’t infringe others’ copyrighted material, and the blog is awash with statements to this effect, asking readers to follow links to websites instead. The problem is that watermarked photos are often cropped and re-used, and I publish in good faith. This is not always 100% effective, but we will always try to ensure copyrighted material is credited or unused.