If you’ve been following us over the past couple of days you’ll know that South Korea has gone mad about photos purporting to be Angela Merkel nude, with over 16,000 page views from S.Korea alone yesterday.

The Huffington Post reported these same photos in 2013, and says they’ve been doing the rounds since 2009. It’s fairly clear that they’re a hoax, an April Fool’s joke, according to some.

What’s less likely to be a hoax is the following photograph.

From 1972, it shows a then 17 year old Angela Kasner taking part in a civil defence exercise under the watchful eye of an East German officer.

This photograph surfaced a couple of years ago and apparently did not meet with the approval of the German chancellor, who has always denied links to East Germany’s communist past.

Personally, I don’t see this photograph as anything ominous. To be able to attend university, it was necessary to be part of these exercises, regardless of one’s personal ideologies, so there’s nothing particularly sinister about this, bearing the time and the divisions in eastern Europe.

What I’ve said before, and maintain now, is that -also within the time and the ideologies involved- I’d be wholly surprised if Mrs. Merkel hadn’t observed or participated in naturism as a part of normal, everyday life. Prior to the Berlin Wall and the communist bloc collapsing in 1989, east Germans were strong advocates of naturism.

After the war, naturism didn’t gain popularity in the capitalist west as it did in East Germany, where it took on more social significance. By the 1960s, it had become a mass movement, said historian Hans Bergemann, who in 2000 organized a touring exhibition in Germany on the FKK movement.

“FKK became so popular that in principle no one noticed whether people were naked or dressed*,” Weinreich said of people’s casual attitude toward nudists.

With this mindset, can we really believe that the Chancellor never participated in naturism in her youth? I find that hard to believe.

One thing I would say is that if real photos ever were to surface of her participating in the naturist lifestyle, it would be an enormous fillip to the lifestyle not just in Germany, but right across Europe. Furthermore, I believe those photographs would be a enormous boost to Mrs. Merkel’s personal popularity. If such photos exist, there’s currently no evidence of them likely to appear. Naturism, it seems, is rather more of a skeleton in the cupboard of public figures than the political taboo of the past couple of decades: ‘I smoked a joint but didn’t inhale’. 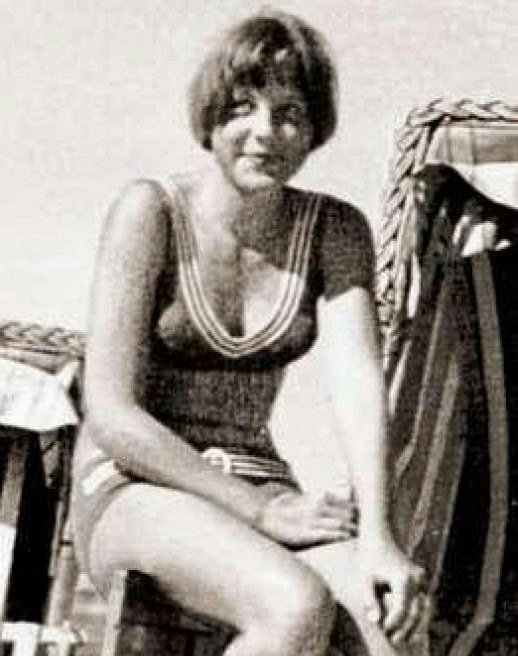 (above: the young Angela Kasner)

Angela Kasner camping at Himmelpfort, 1973. Yes, there are facilities for naturism at Himmelpfort (although this is true for many locations in Germany)

*in naturism, this remains true, even now.

The post we did earlier in which Angela Merkel’s unconfirmed nudist past in the DDR was mentioned jogged my memory about another post I’d seen on a tumblr blog, and which I’ve spent the remainder of the evening searching for, and eventually finding.

I’m 100% certain the woman at the front of the photograph is the same one shown in a previous ‘Angela Merkel nudist’ shot, this one below.

What’s more, I’m 99% certain the woman in the centre of the pic above is the same as the one at ‘Angela’s’ side in the top shot. Why has no one spotted this ‘new’ photograph, and the similarities to ‘Angela Merkel’ before?

This ‘new’ photograph also gives us a few ‘clues’ to its location, perhaps. It’s obviously a camp of some sort, but there’s a car in the photo. What sort of car is it? German? If someone could identify it it might narrow down the geographic location where the photo was taken. It still wouldn’t be ‘definitive proof’, but an American car, of a particular vintage, seems unlikely in East Germany at the time ‘Angela’ was indulging in naturism.

Originally, the shot was ruled out as being ‘Angela’ as it was believed to come from a 1950s German naturist magazine called ‘Helios’, and the 1954 born Angela Merkel would have been too young to fit the age that the alleged ‘Angela’ is in the photos.

I think the car looks to be of 1950s vintage. Again, nothing definitive, as a 1950s car could still be running when these photos were taken. If it were to be Angela Merkel in the photos, the photos would need to date from…1968-70? when she’d have been mid to late teens. And herein lies another clue. The hairstyles in the photos mostly look later than the 1950s. Indeed, they could well be late 60s vintage. None of the hairstyles look 1950s to me.

Furthermore, what’s on the horizon? Are those watchtowers? (Bear in mind, in a campsite, they might simply be wooden buildings. Equally…could they be in the shadow of the wall that divided Germany? Is this a lake location somewhere near Berlin? Or further north between east and west?)

For the record I don’t think it’s Angela Merkel’s naturist youth in the photos, but it’s still nice to think that Germany’s leader might have done what many East Germans did so naturally behind the Berlin Wall, and that was to treat nudity as an entirely natural part of the great outdoors. 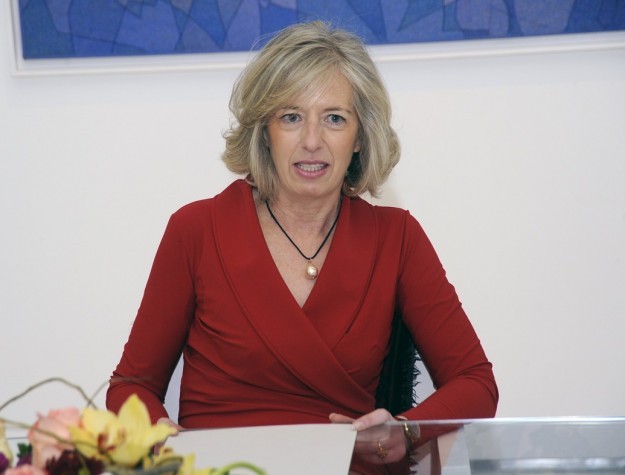 Not many female politicians have been photographed semi-nude, although Ukraine’s Olga Lyulchak was a recent victim of the iCloud photo hack. She simply laughed and shrugged it off. ‘I’ve nothing to be ashamed of’ she said. And she’s right.

And a long time ago on SLN we reported on Angela Merkel as a young nudist (although the photograph has never been authenticated). 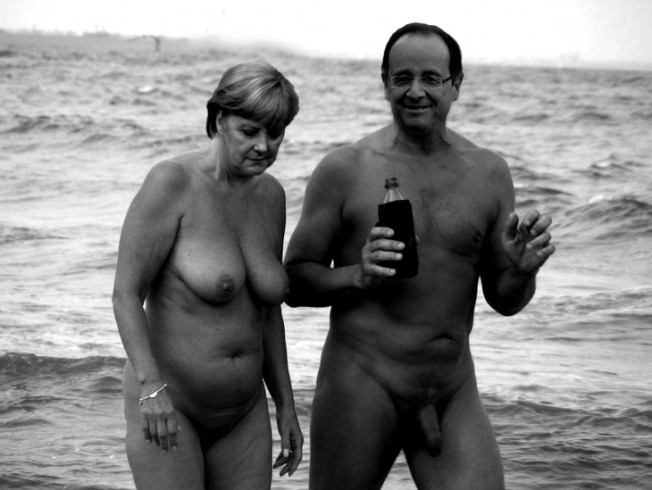 while wife of former Canadian PM Pierre Trudeau was photographed with Mick jagger showing more than (or as much as) she expected to, the photo in part causing her husband to lose an election.

I actually like it when ‘news stories’ like these break. Too often our politicians give the impression of being automatons who couldn’t find fun if Walmart/ASDA had an entire aisle dedicated to it. In the swinging 60s, none of our politicians had tried ‘pot’? In the 70s, they tried it once and didn’t like it, or didn’t inhale? Ah, come on, who are you all trying to kid!

So when a high profile politician in Italy goes topless on vacation, it humanises her. It also empowers all women of her age to think ‘yes, it’s perfectly acceptable to do that’. Ms Giannini, we salute you.