I think we all try to see the good in everyone, in the main, and adopt the view that we treat as we are treated. I know, then, that I throw my hands up in despair whenever an individual, or group of people, determine to show how stupid, illiberal, hateful and poisoned they are.

We don’t know the full circumstances yet, but it appears that a group of Muslim women have attacked a French girl in a park in Reims. From what we know as of now, the Muslims shouted at the French girl for being ‘immoral’. (Note: describing the assailants and victims is hard. It could well be that those indicated as ‘Muslim’ have been born and raised in France too). The victim’s ‘crime’ appears to have been to wear a bathing costume -probably a bikini- in the park, on a sunny day.

On Wednesday, a young woman was assaulted by a gang of girls because she was taking a sunbath in a swimsuit in a park Reims (Marne). This is the daily L’Union Saturday that tells that Wednesday afternoon, the young woman enjoying the sun and the lawn with two friends in the outfit that requires the exercise of summer tan, the Léo-Lagrange Park, in the city center.

That’s when a girl leaves her group of girlfriends to reproach him for his too skimpy outfits and indecent attitude. “Appalled by such a speech to the hints of religious police, tells the Union, the young woman fights back by retorting that does not have to dictate his way of dressing.” The tone rises and the whole group is reconstituted to pummel the bather shots. Witnesses interpose themselves and call for help, which lead the young woman at the CHU de Reims. It will emerge in a few hours later with four days of total incapacity to work. The investigation of the violence of repression brigade has identified five girls from different neighborhoods in Reims. Two are minor. The youngest, aged 16, has been summoned to the prosecutor’s delegate and the other, 17, was placed under assisted witness status. The other three aged 18, 19 and 24 will be judged on September 24 by the Criminal Court. On Twitter, the deputy mayor of Reims, Arnaud Robinet (LR), considered the attack “intolerable in our territory’.

The eldest three, of a gang of five, have been named in some French media outlets, and it’s fair to say that they carry ‘Muslim’ sounding names, although I won’t name them here. The younger two can’t be named due to their age.

This has, in turn, spawned another ‘Je Suis Charlie’ style internet campaign, ‘Je Porte mon maillot au parc’ (I wear my swimming costume in the park).

The Mayor of Reims, Arnaud Robinet has said: ‘We have to be very careful not to jump to conclusions. All the same, I can understand why people have assumed that this attack had religious motives. If that turns out to be the case, it is a very serious incident.’ 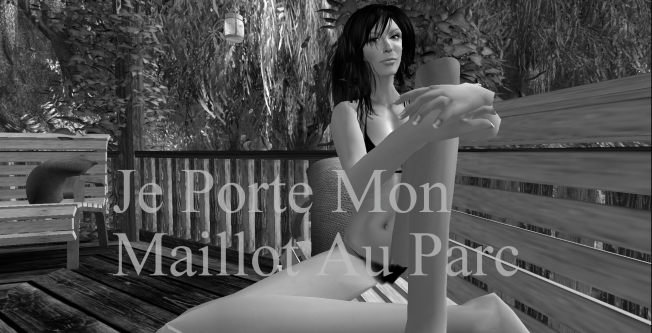 We won’t pre-judge, but we will support the right of women to wear swimwear in a public park, in France, and will readily support this internet meme to register support for the freedoms enjoyed by European women, and to say that it is no-one’s right to deny them that right.