It’s well documented that sleeping nude has several health benefits. One of these is that the body’s temperature self-regulates, and adapts to the temperature to raise cortisol levels, for one thing.

The same is true of daytime naturism, the body adapts itself so that the weather doesn’t need to be fantastically hot and sunny in order to feel comfortable. Good to know in what has been a desperately indifferent summer. The wind is an enemy, though, and it will certainly make you feel cold even if temperatures are ‘OK’ (your definition of ‘OK’ will be different to mine depending where you live in the world 🙂 ). But on a relatively still day, it’s possible to be naked, outdoors, on cool days. I wouldn’t advise sunbathing in 5 degrees celsius just because it’s a cloudless winter’s day, of course, and the idea of walking through snowy woods in nothing but a pair of boots is foolhardy, but there are probably more ‘outdoors naked’ opportunities than we imagine.

For instance, I walked down to the village shop for a paper today, The Times has a positive article on naturism in today’s edition (unfortunately it requires subscription and log-in to read, so I’m afraid I can’t link to it for you, apart from the first paragraph, so it necessitated a trip out for a paper edition. On my way back I got caught in a heavy -and I do mean heavy- shower. The presence of a light rain jacket didn’t help. By the time I got home looking like a bedraggled rat, and with the paper so sodden I’ve had to leave it sitting on a window ledge to dry in the sun, I was soaked through to the skin. Everything had to come off and be thrown into the washing machine! 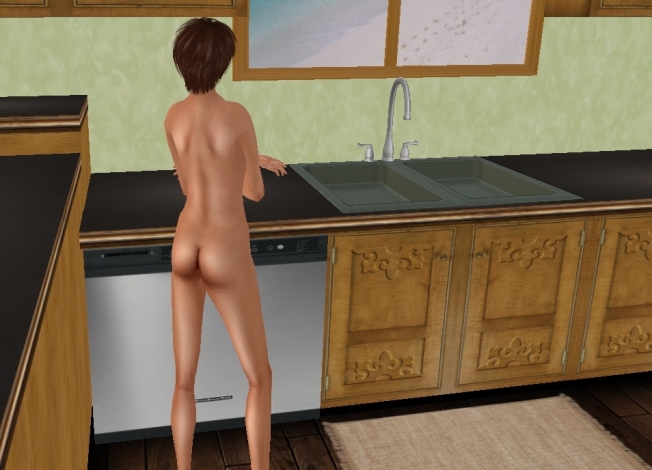 By this stage the shower had passed and the sun came out. I had been wearing a pair of canvas trainers while out, and these were sodden too, so I decided to set them out on a bench in the back garden to let them dry in the sun. Once out there, it felt rather pleasant, despite fairly indifferent temperatures so I decided that, well, I wasn’t going to get dressed just yet.

Indeed, as my body adjusted from shivering in wet clothes, it felt more than comfortable, and thus I pottered around my kitchen as nature intended for a good hour thereafter. The children quite merrily followed my lead and cast off their clothes to run in and out of the garden and up and down the stairs without once ever complaining about ‘feeling cold’.

We only got dressed as we needed to go out in the car, and I have to say that I certainly felt too warm, even in a pair of shorts and a T shirt, after having been ‘cooled’ a little bit by wandering around outside for a bit. Perhaps we need to be considering the health benefits of nudity more closely, as it seems to me that our immune systems would all benefit from a bit of a surge if nudity in and around the house was more widely practiced. I’ve boosted my vitamin D, resulting in a better sense of wellbeing, I’ve allowed my skin to be rid of toxins (wearing clothes ensures toxins are re-absorbed back into the skin, causing some skin problems) which will give it a healthier glow. It’s suggested that being nude, and not constricted by clothing, improves circulation. One study suggests that being barefoot decreases the chances of developing Alzheimer’s Disease. All good reasons why we maybe need to embrace naturism within the home and garden more often.

One thought on “Self-regulating body temperature”